If I was a Wishman! 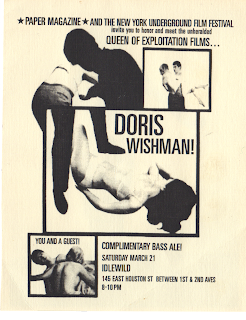 1998 NYUFF program book courtesy John Michael McCarthy
She's in a league with Roger Corman, Russ Meyer and Ed Wood. She's an artist who's influenced John Waters and Quentin Tarantino. She's probably never made a watchable film, but she had a 40 year career and released over 30 movies. All low budget/no budget.
Producer, Director, Writer, Editor, ADR artiste... She performed so many roles on each one of her films that she had to invent cockamamie pseudonyms to make it seem like she had a crew. When in reality she had a nudist camp and its habitués, a fading burlesque performer as a star, and C. Davis Smith as her cameraman.
If you like Ed Wood and love Russ Meyer you will be astounded by the films of Doris Wishman.
Doris Wishman's career began with a perfect storm – she was widowed just as a court ruled that any film depicting nudity at a nudist camp was not obscene. I devote this post solely to her masterpiece...
Nude on the Moon
That's the title. It's the plot. It's the story. It describes exactly what the film looks like. The actual 67 minutes of celluloid are redundant. A wealthy private scientist builds his own rocket with the help of his dedicated assistant, and they fly to the moon. The moon looks exactly like Coral Castle, Florida, and is inhabited by a race of amazonian moon woman who communicate psychopathically. Which is to say, via pipe-cleaner bobble head antennae. Wearing nothing but their bikini bottoms.
The Astro-men are briefly imprisoned, let themselves out of jail, and, to use a 1930s term “make love” to the nude on the moon women (which is to say, talk their heads off about love without any physical contact whatsoever). They then steal all the moon gold and rocketship back to earth.
Only to come to, from a dream. Hey, they never left the earth at all. But the wealthy private scientist suddenly notices his secretary is beautiful. And we are wincing at this last, cheesy device – she is, of course, the nude on the moon amazon queen. Love was waiting here on earth all along.
It is Wishman's ability to fill one hour with mise-en-scene of topless women doing, basically, topless pilates while everyone's speech is out of sync with their lips that is absolutely fascinating. She is a supreme minimalist. No sound recording, no special effects, no clothes, no real actors. And yet a film emerges.
Wishman's nudie cutie period lasted 8 films made between 1959 and 1964. Each was filmed at a nudist camp. Except Nude on the Moon. So she had to lie about that (She must have been quite believable – Coral Castle is a very particular locale) 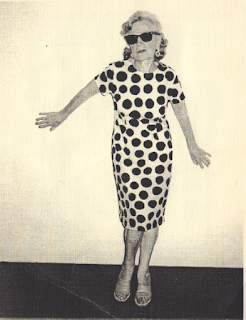 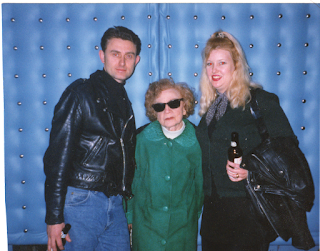 "My starlet wife Dawn Ashcraft and I actually met Doris Wishman at the 1998 New York Underground Film Festival and had our picture made with her. Later we all went out to eat and we talked about our mutual friendship with David F. Friedman.

"I am sitting here in my smoking jacket (and I don't even smoke) thinking about my two mothers (one adopted and dead, the other biological and alive, on this, the night before Mothers Day, Now I'm wondering what if Doris Wishman had been my mother. If I am the bastard son of Elvis Presley, then goddammit, doesn't it make sense that Doris Wishman is my mother? I have to admit BAD GIRLS GO TO HELL and DOUBLE AGENT 73 are my favorite DW films. My starlet wife and I talked with her about a number of things at a private dinner during our snowy visit to the New York Underground Film Fest in March of 1998 (we screened THE SORE LOSERS). Doris got a kick out of the fact that Dawn was calling in sick everyday (back in Memphis) so her boss wouldn't know she was in NY. Doris told me she and David F Friedman (who had appeared in SORE LOSERS as "God") were good friends back in the day and to tell him hello (and I did). I once read a review on my TEENAGE TUPELO where a reviewer claimed that Hugh B. Brooks (Johnny Tu-Note) had also appeared in NUDE ON THE MOON. At first I thought this was the stupidest mistake someone "in the know" could make. Then I realized I had been paid the greatest compliment on Earth - or the Moon. We miss you, Doris."

For more on John Michael McCarthy (JMM) visit www.guerrillamonsterfilms.com where you can 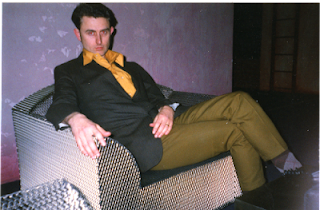