You will look at this clip and at some point notice a diesel locomotive is lodged in a hill. To me it appears the engineer ran down a tail track at mainline speed, jumped the derails, and went airborne. The nose of the locomotive is at least 20 feet in the air. When you see her in relation to the crane that will lift her up and swing her down onto the track you will be impressed with how airborne this crazy loco is...

This is just painful

This is the second installment of my RIP Fred Bacher posting.

Jackson Browne is very much a troubadour of my generation. There is so much going on there that it is hard to know where to start. Tonight I will turn back the dial on the wayback machine and identify what this lyric offers those of us who were there there, then.

Jackson Browne's "Running On Empty" is very much a work that is meant to capture the esprit of the mid-twenties someone of its day.

Looking out at the road rushing under my wheels
Looking back at the years gone by like so many summer fields
In sixty-five I was seventeen and running up one-o-one
I don't know where I'm running now, I'm just running on

Everyone I know, everywhere I go
People need some reason to believe
I don't know about anyone but me
If it takes all night, that'll be all right
If I can get you to smile before I leave

Email ThisBlogThis!Share to TwitterShare to FacebookShare to Pinterest
Links to this post
Labels: Jackson Browne, Running on empty

Quote of the day 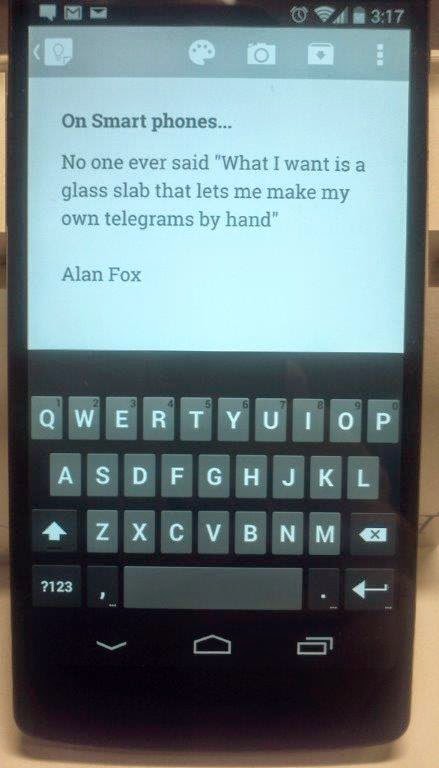 No one ever said :"What I want is a glass slab that lets me make my own telegrams by hand"