Ask any local and they'll tell you that the colonial townsite of Niagara-on-the-Lake "has charm coming out of its arse". The most historic part of what was once Upper Canada, there have been buildings on this site for two hundred years. So naturally as soon as I arrived in town I had to do a survey of the town's architecture. Ignoring the colonial, I went straight for the late modern, of course.

First up, the acknowledged masterpiece of Ron Thom's 1973 Festival Theater. According to the website Ron Thom House for Sale - "Thom liked to set his buildings so that people could come across a house in the trees – from above or below – but not be able to see all of it. A low-hipped cedar shake roof floats over the cedar and cement block base. Glass meets glass and corner windows vanish into thin air. The house reflects Ron Thom’s admiration for the designs of both Frank Lloyd Wright, and Richard Neutra."

Although Thom's idiom is nominally west coast (think Arthur Erickson) his execution at Shaw has more in common with Soviet Block Eastmodern. 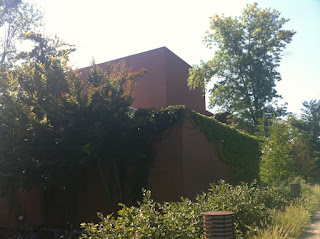 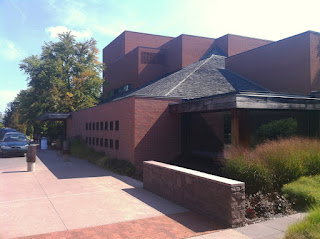 Well guess what. Thom didn't design some west coast cedar gem nestled into a hillside. Thom plunked down a late modern brick pile, all planes and geometry and completely absent glass meets glass. With absolutely nothing of human scale to the place, Thom's Festival Theater shows an insular cultural insensitivity that's remarkable for a town that has only one business- staging early modern plays! 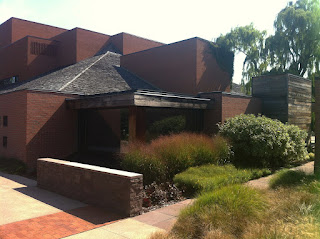 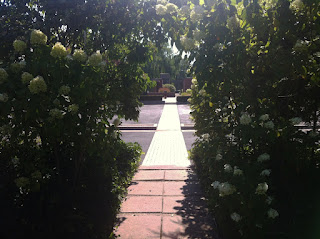 The only inviting vista - entering via the rear

At almost the other end of Queen Street is another inexplicable intersecting planes piece of Trudeau-era optimism - the Canada Post outlet. It's not merely insensitive to the 200 year old buildings that surround it. It reminds us that the Feds do what they want, where they want. No municipal ordinance holds sway for them. This charming institution even has a name - Property Number:61768. And its own website. 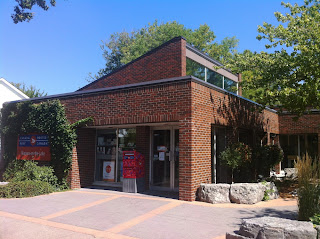 Speaking of own website, here's the Campbell Scott house. Campbell was an early cultural influence on me – he taught me woodworking (along with a generation of students at St Catharines Collegiate Institute and Vocational School). It's sad to know he has recently passed away (February, 2016). 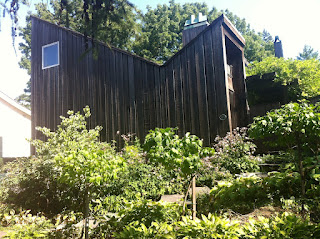 Yes it has a door


I've saved the best for last. Some clever Johnny or Joan managed to sit at a drafting table and foist a Brutal School Bandshell on the governors of Simcoe Park. This foreboding silhouette "illustrates typical Brutalist characteristics such as top-heavy massing and the appearance of a bunker-like structure." 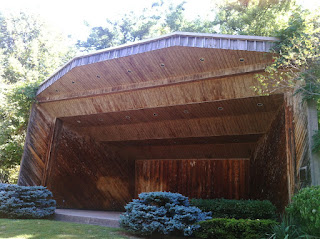 Top heavy massing and the appearance of a bunker


To me it's too funny. Usually a brutalist building is concrete gravured with the texture of the wood forms in which it was cast. Here, they just nailed together the wood form. Way to cut out the middleman. 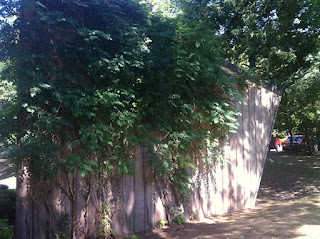 Up next - Post Modernism in Colonial Williamsburg.
Posted by The Ironic Mr Fox at 23:03 0 comments

"Are you going to Raw Stock?" is not the first thing you would expect a hotelier to enquire as you dropped your bags in the lobby. But Bernard Gray Hall is a B&B that delivers the pleasantly unexpected.

Perfectly located at King & Prideaux in the heart of Niagara on the Lake, Bernard Gray Hall is ten minutes on foot from all four of the Shaw Festival performance spaces.

Bernard Gray Hall proprietors Gloria & Henry are attentive hosts, social animators, victualers of distinction, felix-philes of the premiere rank and holders of the key to their quaint community of Niagara on the Lake. They will discretely fulfill arcane requests but largely what is on offer is the comforts of home for those on the road. 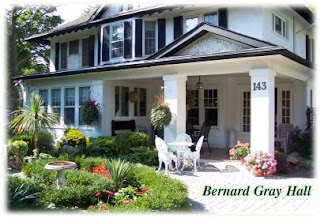 Email ThisBlogThis!Share to TwitterShare to FacebookShare to Pinterest
Links to this post
Labels: Bed and Breakfast, Niagara on the Lake, Raw stock, Shaw Festival

Populuxe is the great American Jet Age architectural vernacular that emerged during the auto-centric postwar boom. Here I document a handful of remaining examples in the Canadian city named for the geologic wonder, Niagara Falls. Featured attractions are the Skylon Tower, Flying Saucer Restaurant, the Cadillac Motel, and more...

Port Credit to Clarkson via GO

Stroboscopic images of the right of way

Email ThisBlogThis!Share to TwitterShare to FacebookShare to Pinterest
Links to this post
Labels: Clarkson, GO, Port Credit, right of way, ROW, stroboscopic, via

On Monday August 13th the power line failed for the Gerrard streetcar line eastbound. This video shows the arrival of some maintenance-of-way equipment, and their repair work.

A hot summer rain in my garden.

2nd logical iteration is women's high heels. Convo me if you want to collaborate.

2nd logical iteration is women's high heels. Convo me if you want to collaborate.