So some random Youtube surfing has led me to this musical number sung and danced by Marika Rökk in "Hallo Janine" (1939), with music by Peter Kreuder. I would swear it's Busby Berkeley (and I am accomplished at swearing) but as the Straussian Waltz swells at the end there is no doubt this is echte Deutsche...

Earlier this year the City of New York released over 800,00 archival images via a municipal website. The website feels like something the department of sanitation would publish to announce what goes in the recycling bin. But the image archive... 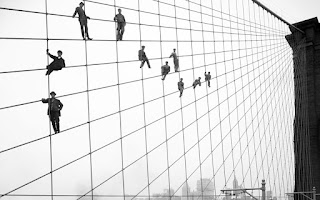 Painters on Brooklyn Bridge, 1914
(media handout image)
BTW for those who are musically inclined it's a lovely piece of music. Almost a hymnal. It's especially beautiful in A#.

The perfect site to browse after your post-Nuit Blanche brunch - NYC Municipal Archives Gallery
Posted by The Ironic Mr Fox at 21:20 0 comments

The great song stylist Andy Williams has passed at the same time as my late Mother-in-law Aurolyn Kennedy, who lived on, and was part of, the great plains. Although not a sodbuster, she was a force of nature.

When Johnny Mercer (lyrics) and Henry Mancini (music) sat down around that piano they crafted what is possibly the world's most perfect pop song. In this blogpost I celebrate it...

The film Breakfast at Tiffany's gave us a great Audrey Hepburn film, but one with some severe cultural gaps, what with Holly Golightly being a prostitute and all. And Audrey Hepburn can't sing. (It's interesting to observe that only a couple of years later her singing as Eliza Doolittle would be dubbed out of My Fair Lady).

Nonetheless, now is no time to be dragged down. Moon River, how do I love, thee? Let me count the ways:

Moon River, wider than a mile,
I'm crossing you in style some day.
Oh, dream maker, you heart breaker,
wherever you're going I'm going your way.
Two drifters off to see the world.
There's such a lot of world to see.
We're after the same rainbow's end--
waiting 'round the bend,
my huckleberry friend,
Moon River and me.

HOUSTON — In 1995, a test pilot with a rocket contraption strapped to his back shot into the air and flew over the Houston Ship Channel like Buck Rogers for 28 seconds. The crowd went wild.

The demonstration was the first and last public flight of the RB-2000 rocket belt, one of only three such devices operational in the world.

After the demonstration, one of the developers of the rocket belt put it in his trailer and drove off. It hasn't been seen since.

As for the developers- one is dead, while another is a suspect in his slaying and under judicial order to pay a third partner $10 million for absconding with their invention to keep the profits to himself.

In the midst of it all, the question remains: What happened to the rocket belt? * 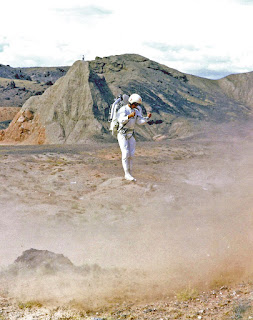 Tear up your Netflix Card!

Troma Films has announced they are publishing a library of 150 feature films on Youtube available for free viewing! That's right, it's all there – From Alien Blood to Zombiegeddon, brought to you courtesy of the studio that produced The Toxic Avenger Parts 1 through IV.

The library features early classics of horror cinema such as 1940s The Ape, directed by William Nigh and starring Boris Karloff, and slightly more camp fare, such as Rockabilly Vampire, The Rowdy Girls and Yeti: A Love Story. And then startling and watchable trash such as Martin Walz's 1996 meisterwerke Killer Condom.

The absolute end-of-career star-slumming of The Seduction Of Dr Fugazzi starring "Help get me out of this picture" Faye Dunaway is contrasted with the screen debuts of today's stars, as in The Wedding Party, an early Brian DePalma work featuring the first appearance of Robert DeNiro and Jill Clayburgh

And there are truly hidden gems, such as John Michael McCarthy's Superstarlet A.D. starring Kerine Elkins, Gina Velour and Michèle Carr. Not really the exploitation picture it pretends to be, it is really a shining example of feminist art cinema. Highly recommended!


Don't forget to hook up your VCR while enjoying the finest in trash cinema!
Posted by The Ironic Mr Fox at 19:38 0 comments

Vimeo member kogonada has produced this video mashup showing Stanley Kubrick's powerful use of one-point perspective in his films.