Mid-Century Modernism is my favorite period in architecture. Modernism is a transitional design idiom that takes us from Art Deco and is a precursor to the International Style. I am always uplifted by the sense of optimism that Modernist buildings display. They are often grand and corporate but are never infused with the Ozymandian portent that International Style buildings instantly generate due to their inhuman scale.

Like Art Deco before it, Mid-Century Modernism had strong design cues and could be executed with economy with a simple superstructure clad in a few details executed with glamourous materials. Put away that marble – we're going with terrazzo! All of this gave the effect of great style at the lowest possible cost. It was therefore possible for any architect in almost any burgh to propose a Modernist building for a new build. Mid-Century Modernism was also perfectly suited for that most common low-cost high style Mid-Century build – the shopping mall.

Growing up in a small City with a Pop. of 250,000 I was not exposed to a great number of international design movements. But Modernism was everywhere. And I remember the sense of occasion one had going to these buildings. They were slick, clean and up-to-date. There were escalators or elevators. One was always the newest medical building. Just walking in the front door you new they would have the latest advances in medical technology. Whatever ailed you would soon be cured.

My real passion for Mid-Century Modernism is what I have named the “Pavilion Style”. In the Canadian City of Toronto there is an entire complex of fairground buildings called the Canadian National Exhibition. These are a fairgrounds so old that once a Crystal Palace was the main structure.

And before all of those things was the 1939 New York's Worlds Fair. And recently an amazing series of “electric city” style nocturnal time exposures has emerged. Breathtaking!

The story is great, but I recommend scrolling half-way down the page to the photo gallery. Read the story afterword and you will appreciate it more.
Posted by The Ironic Mr Fox at 17:40 0 comments


Dear readers I am working on a series on Carol Kaye, the hippest session bass player of the late 20th Century. In the meantime, enjoy!
Posted by The Ironic Mr Fox at 20:41 0 comments

Cover Song Wednesdays - Fasten your Facebooks it's going to be a bumpy ride...


Jackie DeShannon did the music and Donna Weiss wrote the lyrics.

The song obviously had legs but they couldn't move it forward. The Pop History Dig describes what happens next...

" In 1980, Kim Carnes was a 34-year-old singer and songwriter who had experience in both Hollywood and the music business. She had begun her career at the age of 18 in Los Angeles, singing commercial jingles and doing nightclub work. In the 1960s she joined the New Christy Minstrels folk troupe where she met Kenny Rogers and Dave Ellingson, later marrying Ellingson with whom she did some joint singing and songwriting. She also produced some solo albums in the 1970s and had a minor hit or two. Her songwriting, however, was more successful — with Frank Sinatra, David Cassidy, and Kenny Rogers, among others. A duet she sang with Kenny Rogers, “Don’t Fall In Love With a Dreamer” in early 1980, became a Top 5 hit, and also had a related album, Gideon. About that time, Carnes was recording another album for EMI called Romance Dance and worked with producer/engineer Val Garay. The album charted and included Carnes’ first solo Top 10 hit, a version of Smokey Robinson’s “More Love.” Carnes and Garay then began work on a new album.


" During their search for material, songwriter Donna Weiss brought some of her songs over to the studio where Carnes and Garay were working. One was a demo for a newer version of the 1974 “Bette Davis Eyes” song. Carnes and Garay both liked the melody and the lyrics, but the total package wasn’t quite there yet. However, one of their band members — keyboardist Bill Cuomo — gave the tune a more contemporary arrangement, along with a half dozen other musicians backing up Carnes. As Carnes would later explain to Dick Clark: “It’s Bill Cuomo, my synthesizer player, who really came up with the new feel, changing the chords. The minute he came up with that, it fell into place.” Garay recalls that ‘Bette Davis Eyes’ was recorded live in a North Hollywood studio.” I think we did three takes and the one we used was take one,” he said. Carnes has also written about recording the song: “I heard this song about a year before I finally cut it. My band, Val Garay and I rehearsed it for three days before coming up with the right feel. It was a completely collaborative effort between all of us. The next day we cut this track ‘live’ with no over-dubs and got it on the second take…” The song quickly became a major hit, along with the album. In addition to Carnes’ Grammy award for the song, Garay was also nominated for Producer of the Year, but lost to Quincy Jones."


I typically enjoy crafting erudite comments on my posts. Unusually, I herein throw my hands up and say "Look it up on Wikipedia".

She'll expose you, when she snows you
Off your feet with the crumbs she throws you
She's ferocious and she knows just
What it takes to make a pro blush
All the boys think she's a spy
She's got Bette Davis eyes

And she'll tease you
She'll unease you
All the better just to please ya
She's precocious, and she knows just
What it takes to make a pro blush
All the boys think she's a spy
She's got Bette Davis eyes

Kelenföld is an abandoned Art Deco power station in Budapest. Well Buda, actually. Opened in 1914, the facility is in a transitional design idiom that has Art Nouveau tendrils vining around its control surfaces and obsolete generators. Described by all who have the privilege of touring it as "electrifying", it is a thrill to witness in photographs.

Kelenföld is protected under heritage designation, although it is not being maintained in any meaningful way. It's not being preserved - it just can't be demolished. About the only heritage activity is that it is bi-annually open to the public during a Buda "Doors Open". 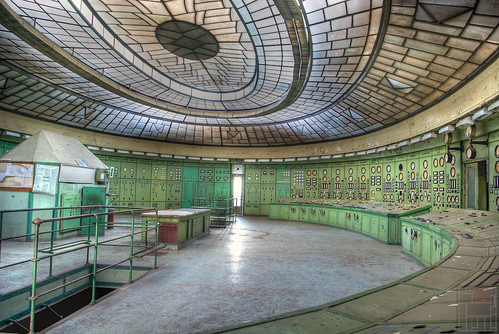 Gizmodo
Posted by The Ironic Mr Fox at 11:29 0 comments