Stephanie du, "The Ironic Mr Fox's" French go-too femme, ecrive'd "I have the song in French and listen to it often. I love it. I can't make sense of about half of what is sung because it's so heavy with slang and with foreign french expressions I have never heard before. I suspect this is done on purpose. I believe the title means something like despite everything in the world everything is alright with me, or something like "this works for me". The literal translation is "This slides for me" (like, it's smoooooth)." Thanks, Steph!

I assumed the whole thing would go 1980s mix trivia. But by accident I discovered a virtual cottage industry of Ça plane pour moi covers. They still record this thing. Here are some of the best.

The Lost Fingers
An Django Reinhart inspired cover of Ça plane pour moi Tears Swedish hotties covering Plastic Betrand. What a beautiful world in which we live in Telex An 8bit a medicore cover mais un formidale punk neue Insanely, Ça plane pour moi is in the the 127 Hours Soundtrack
Posted by The Ironic Mr Fox at 21:11 0 comments

Of Mies and Mien

Just before my illness I was on secondment in Minneapolis-St Paul [MSP], a ridiculous long moniker for a city that we in Canada would just call Welland. Arriving in Downtown MSP the first thing you notice is that there are NO buildings in the International Style. This immediately tells you that from sometime in the 1950s until the 1990s the town was in decline. Even my home town of St Catharines [Pop 280,000] has a building representing that period.

Today's Google Doodle celebrates the greatest International Style architect of all time, Ludwig Mies van der Rohe. Mies to his friends. Le Corbusier is a vastly superior visionary, but he never built anything, so that rules him out. Philip Johnson comes close, but his primary contribution is that he moved the International Style into Post Modernism

A little known fact about Mies is that he never lived in his own buildings. For living he adored luxurious fin de siècle 19th Century architecture, so he lived more like Jules Verne than George Jetson, whilst designing buildings whose vernacular is still as fresh as the latest pop song.

Mies has more than a few Canadian connections. Phyllis Lambert, the Bronfman heir, gave Mies his greatest commission in the Seagram Building in Manhattan.

The Toronto Dominion Centre is essentially a clone of that project. Although it is gradually being eroded. The shopping Mezzanine has been destroyed by renovations. However Shawn Micallef tantalizingly informs us there's a Mies van der Rohe-designed Cinema mothballed somewhere in that complex.

My favorite, and the gem I save for last, is that he designed an Esso Station in a suburb of Montreal. This is an almost inconceivable marvel. Imagine a Daniel Liesbkind Chrystal Harvey's in Newmarket. No, really, that's what we're talking about. A purely functional building for a chain franchise in an unremarkable place. Designed and built by the greatest architect of his time at the height of his powers.

Needless to say the owners attempted to demolish it in 2008. Fortunately it was built somewhere French, where culture is air, and the community refused to demolish, somehow acquired it, and it is now a community centre.

PETA kills 95% of the animals it takes in.

Numerous online newsmagazines report that documents published online show that People for the Ethical Treatment of Animals (PETA), an organization known for its uncompromising animal-rights positions, killed more than 95 percent of the pets in its care in 2011.

In the Huffington Post today, Doug Cooper pens a devastating critique of the high kill rate at PETA animal shelters: "The shelter of last resort" is an interesting euphemism for Death. PETA "accepts" those piteous creatures? Death is accommodating that way: It famously accepts all." 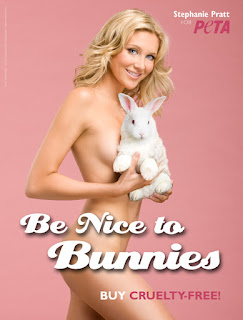 Noting the growing record in the mainstream press that PETA is falling behind the burgeoning success of better-run animal shelters with miniscule budgets yet drastically higher adoption rates, Cooper begins to make the case for a better way of sheltering and adopting animals:

As The Atlantic concluded, "an animal rights organization with a $35 million budget should be able to do a whole lot better."

The documents, obtained from the Virginia Department of Agriculture and Consumer Services, were published online by the Center for Consumer Freedom (CCF), a non-profit organization that runs online campaigns targeting groups that antagonize food producers.

“PETA hasn’t slowed down its slaughterhouse operation,” said Rick Berman, CCF’s executive director. “It appears PETA is more concerned with funding its media and advertising antics than finding suitable homes for these dogs and cats.”

PETA media liaison Jane Dollinger told The Daily Caller in an email that “most of the animals we take in are society’s rejects; aggressive, on death’s door, or somehow unadoptable.”

Dollinger did not dispute her organization’s sky-high euthanasia rate, but insisted PETA only kills dogs and cats because of “injury, illness, age, aggression, or because no good homes exist for them.”

PETA’s own history, however, shows that this has not always been the case.

In 2005, two PETA employees described as “adorable” and “perfect” some of the dogs and cats they killed in the back of a PETA-owned van. The two were arrested after police witnessed them tossing the animals’ dead bodies into a North Carolina dumpster.

In defense of its policy PETA has insisted that euthanasia is a necessary evil in a world full of unwanted pets. But while the group has some well-known allies, including the Humane Society of the United States, a growing number of animal rights activists claim to have found a better, more humane way, adopting what is known as the “no-kill” standard

According to PETA's Ingrid E. Newkirk  “As long as animals are still purposely bred and people aren't spaying and neutering their companions, open-admission animal shelters and organizations like PETA must do society's dirty work. Euthanasia is not a solution to overpopulation but rather a tragic necessity given the present crisis. PETA is proud to be a "shelter of last resort," where animals who have no place to go or who are unwanted or suffering are welcomed with love and open arms.”

According to Michael Mountain at the Zoe animal friends website "None of this should be news to any of us in the world of animal protection. Killing homeless pets has been Ingrid Newkirk’s modus operandi since the time when she held the job of killing animals at the Washington Humane Society. Exactly what is the psychology that lies behind her philosophy that they’re all better off dead is something many of us have speculated on. But more urgent right now is the need simply to stop the killing – and the Kool-Aid madness to which PETA staffers meekly subscribe. "

Introduction: In the 1990s my therapist bluntly informed me that I was “a teller of truths”. That sounds like a moral ideal, but (to quickly quote McCartney) “in this world in which we live in”, it represents an odious characteristic. Which is a paradox. In every situation in which there is conflict, all parties should welcome the voice of absolute, involute, truth.
However, any person faced with the query "does my butt look fat in these jeans" knows that real truth is a toxic substance whose moral value is erased by its ability to do immediate harm to real relationships. And thus, welcome to my world. I am a teller of truths that no one will ever want to hear. That has been true through my college years, my two marriages, my sundry connubations, and most recently, my beloved cousin's upcoming planned family reunion. (Fortunately, it has never infected my work environment, where I lie like a rug)
Herein I present my moral tale of a boy who cannot help but tell the truth, drawn entirely from mythology.
The Emporer's New Clothes comes to us today via Hans Christian Andersen, a man whose name translates literally as “the Christian Son of all Men.” I'll mash in the current Wiki:
“A vain Emperor who cares for nothing but his appearance and attire hires two tailors who are really swindlers that promise him the finest, best suit of clothes from a fabric invisible to anyone who is unfit for his position or "just hopelessly stupid". The Emperor cannot see the cloth himself, but pretends that he can for fear of appearing unfit for his position; his ministers do the same. When the swindlers report that the suit is finished, they mime dressing him and the Emperor then marches in procession before his subjects, who play along with the pretense. Suddenly, a child in the crowd, too young to understand the desirability of keeping up the pretense, blurts out that the Emperor is wearing nothing at all and the cry is taken up by others. The Emperor cringes, suspecting the assertion is true, but holds himself up proudly and continues the procession, deciding never to be so vain again and to take his position more seriously.”
Andersen in his telling twists the most important detail – in the original Persian, if you are born of your mother and father, you will see the clothes. If you are a bastard, you won't. This is an enormous political statement that most of the bourgeoisie in this state are illegitimate.
Anyhoo, staying with the theme, we have the boy saying “But he's not wearing any clothes”. And being immediately ostracized by his entire community for telling that truth. (Back to me, the truth teller)
After being outed as a truth-teller everyone in the canton (or duchy, or prefect, or whatever) wants to execute the boy. He of course hits the road. And now we have a fiefdom ruled by a naked Emperor and a boy wandering under threat of death to his next safe haven.
Lady Godiva
My mashup is a whatif? What if, after outing the naked Emperor, the boy next encounters Lady Godiva. Just try to imagine that! From the boy's perspective, he's just escaped execution for declaring the naked king was naked. Now he sees a naked queen? How f**ked up is that?
I imagine that endangered truth-telling little boy basically loses his mental capacity at that point. Sort of like a Wile E. Coyote vs Roadrunner moment. Even though he knows this royal is nekkid, he also knows that no good can come from confronting that fact. A nude titled Lady rides by on horseback, and now he knows enough to say nothing.

http://www.youtube.com/watch?v=VfthrizXKOM
Posted by The Ironic Mr Fox at 20:07 2 comments 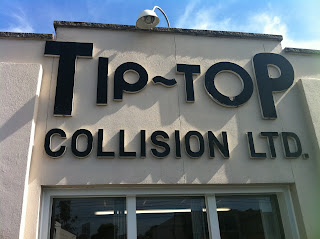 The Crossroads of the Danforth is one of the remaining areas of Toronto that retains working architecture of a previous time. A clear example is this early 20th century gem Tip Top Auto Collision.

It has been taken over by Jose Murillo, Sr. who has run Tip Top Auto Collision as a family owned and operated business for over 40 years!

Now 3 generations of the Murillo family run the enterprise, with Jose's son Joe Murillo managing the business, Joe's wife, Liane is the Office Manager and their son Zachary is a mechanic.  The Murillo family very active in apprentice training and certification programs for the auto repair industry, 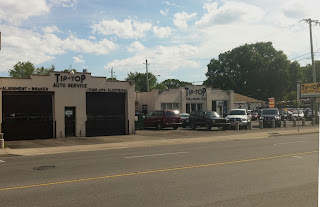 Personally I'd like to recognize the Murillos for the quality of conservancy they have maintained with regard to this facility, such as sensitive care of the unique signage. 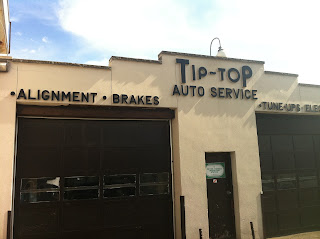 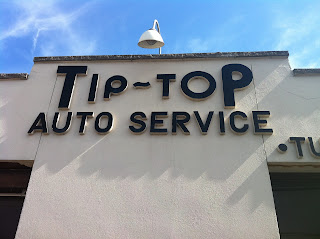 Founder Jose Murillo can still be found at the shop greeting customers and friends.