This weeks blogpost comes to us via 50plus magazine:

"An unhealthy diet is linked to about one third of all cancer cases. Here are the top "all-star foods" that can protect you."

Email ThisBlogThis!Share to TwitterShare to FacebookShare to Pinterest
Links to this post
Labels: cancer, cancer prevention, foods that prevent cancer

Alan takes the Allen is my valentine to Allen Road from a subway train. It is a companion piece to Stations of the crosstown subway stylistically. What I like most about it is that about half the effects are "photographic", meaning that's the way I captured the image using an iPhone The other half of the effects are digital image processing. The idea is to find new patterns and shapes in the ordinary.

A shout out to my son Philter Fox for letting me use his house mix Blip Bounce as the soundtrack.

I am cured of cancer

Well now I have the result of my treatment - I have been completely cured of Stage 3 Oropharyngeal (tonsil) cancer. And I know you've all been thinking of me at different times since my journey began last November. And I know that has been part of what has given me the strength to make this journey when I didn't know where it was going to lead to.

When I started writing this post I began to look back at each of you, and what you have achieved in the same time period as my treatment - Nov 3 2011 to Apr 12 2012.
And every week my mother and father drove 2 hours each way to bring me chicken noodle soup, and love.

The energy of this life force is a mighty river, greater than Niagara or the Amazon, and we are all being pulled along in its power. That is what makes community. We would all be happy if we could live forever in that time when everything is perfect but that can never be. In our journey through life the good times never last, but the bad times never last either. When we harness that energy, good or bad, and move it in a new direction, that is when we become difference makers.

Today I give thanks that I got my life back. But more importantly, I celebrate all your lives, and the lives of those you know and love. You are all been so supportive during my journey, and every kindness has made a difference.

But I have to say my biggest hero is my daughter Chloe, who has been living with a crippling form of arthritis for over a decade. For me, every time the pain got too much to take, I just remembered what Chloe goes through every day was that much worse. And I sucked it up, and manned up, for her.

Thanks to the radiation oncology team of Dr Andrew Bayley and the chemotherapy team of Dr Lillian Siu, the technicians at the linear accelerator treatment unit #5, and countless others at Princess Margaret Hospital. 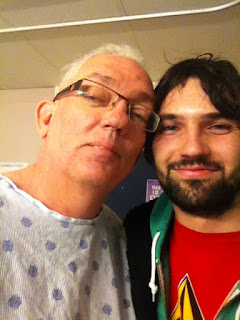 Trooper We're here for a good time, not a long time

Stations of the crosstown subway

Stations of the crosstown subway* is my valentine to our beleaguered TTC. Using my iPhone I videotaped each station to capture some aspect of it. Then I edited it and applied heavy visual effects and a custom music theme to create three "movements". The second movement is very naturalistic and features images of the new T1 Toronto Rocket subway trains in far-flung suburban stations. The third movement is my favorite. It shows how robot viewing systems see us (humans)

One day I casually asked my septuagenarian mother what celebrity she fashioned herself after in the mid 1950s. Without missing a beat, she replied "Elizabeth Taylor" (in a way that added an implied d'uh).

It broke my heart. Elizabeth Taylor is arguably the most beautiful motion picture star ever. For one thing, those violet eyes. For another, all those marriages to Richard Burton.

Imagine having to prepare for every social outing, every festive occasion, every date, and every petting session, looking like the world's most beautiful woman?! And do all that on the salary of a checkout girl at Maiken's Groceteria?

Well it's 50 years later and we gave women the pill and liberated them. Then they progressed from secretaries to CEOs. Awesome. Mission Accomplished, am I right?

Well, no. On thing that hasn't changed one iota is that women are judged based by beauty standards that do not reflect the actual, natural way women look. The last time a man painted a painting of what a real women should look like is when Rembrandt painted Saskia, 400 years ago.

So imagined how pleased I was when I viewed this photo documentation of Britain's National Cleavage Day, an annual "celebration" created by Wonderbra in 2002.

Looking at the photo, I see a cluster of size 2s and 4s centre stage. Aaaaaaargh! But the models at each end of the photo represent far more realistic depictions of women. I see size 12s and 14s and 16s. I see Buddha bellies and muffin top. And to quote Mickey Avalon, she has "More junk in the trunk than a Honda / I know she wanna do the Jane Fonda."

The ethnic mix isn't very adventurous, 3 women of color out of eighteen. But you can't judge a person's ethnicity by their skin color. Trust me, being Romani isn’t a picnic

But my big take-away here is that the natural woman movement is reaching the tipping point. Several European nations are considering banning underage models and ridiculous photoshopping. In Canada it started with Dove's now-abandoned "Real Beauty" campaign.

And then finally what you trolls have been waiting for: The video of the event. People, we're trying to liberate, not fascinate....