BlogTO provides a surprisingly helpful look at Toronto's three competing hourly car rental outfits. Surprisingly helpful because a typical BlogTO article sends its abstemious vegan food critic to review restaurants like WVRST, which serves ONLY beer and sausages. Neither of which the food critic will consume before writing their review.

BlogTO: Car sharing in Toronto: AutoShare vs. car2go vs. Zipcar

BTW the comments are even better than the article. Especially the comparison of insurance plans, which the vegan reporter never thought about because they've never driven a car and were too busy with their soy smoothie.

And here's the AutoCar AND Zipcar location right at the end of my laneway. It's so darn handy I'm actually going to get a driver's license again. 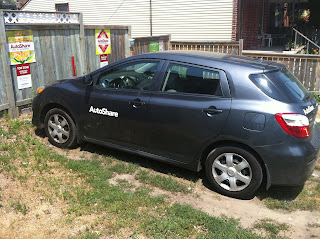